I've only messed with TV Episodes at the moment, but the conversions look to be picking things up nicely, converting them and putting them in itunes.

My issue is that although i have the watch folder setup as attached, the tv shows get put into the Home Movies folder and no auto tagging has occured.

is there a specific format needed for the auto tagging to read the showname etc.? 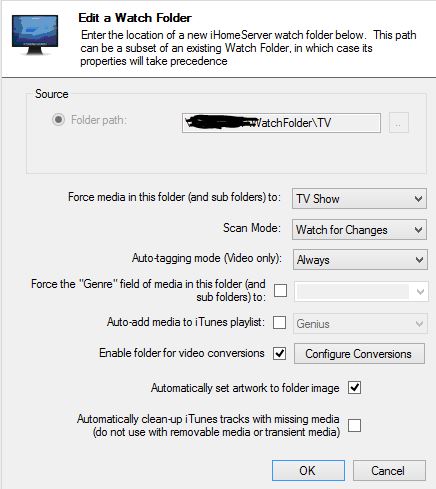 Sorry for the delay in getting back to you.

1. in order to get the TV episodes to show up as TV episodes instead of Home Movies, then set the Force Media option to 'Television' within the Watch Folder's settings - see http://www.bizmodeller.com/ihomeserver/ ... window.htm

2. we originally only supported zero-touch AutoTagging for movies, not television episodes. From iHomeServer 3.1.60.0 upwards, we now support zero-touch AutoTagging for television episodes as well, however, you must first identify the television by performing an AutoTag for a video file in the same folder. iHomeServer will then "remember" the series name and series number for that folder and attempt to AutoTag automatically subsequent episodes that are put into the same folder. To do this, you should also enable the AutoTag option again in Watch Folder settings.
Top
Post Reply
2 posts • Page 1 of 1

Return to “Questions or Issues”